When Dennis came to look at our property and estimate the project for us, he immediately recommended the perfect spot. Our pond ended up nowhere near where we thought it would go.

I was impressed with his ‘start-to-finish’ knowledge and his ideas on layout and landscaping. Then Dennis and his crew arrived at our house in the early morning and we watched in amazement - in a matter of no time, an otherwise unexciting portion of our backyard was transformed into an amazing water feature!

By the end of the day the project was completed, cleaned up and looked as though the pond had been there forever. We relied on his expertise in selection and placement of the plants around the pond, and he walked us through each step of getting started in the wonderful world of water gardening and Koi fish.

We continue to rely on his advice and expertise and would recommend him to anyone thinking of adding a pond to their property. 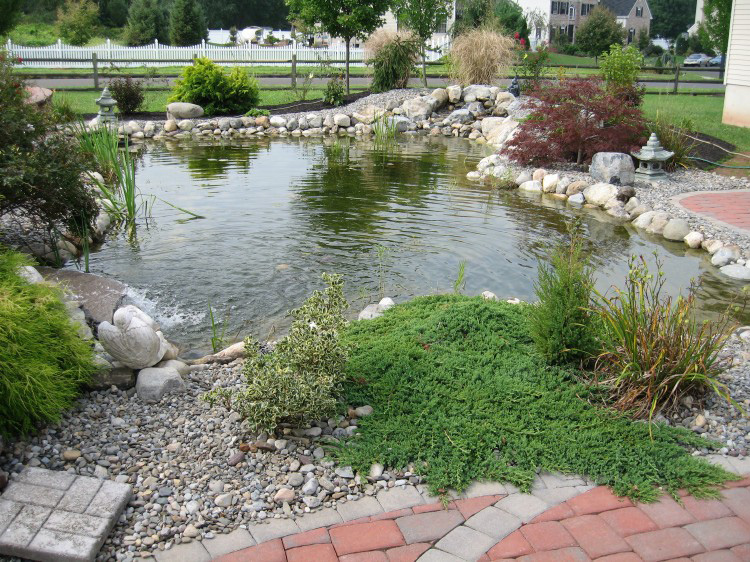 The Hoover Pond and How It Came To Be

It began one summer when my husband bought me a beautiful anniversary present - a small Jack Daniel’s Whiskey barrel with an old-fashioned water pump. A friend who owned a pond gave me three beautiful goldfish and told me that I could return them when winter came. I was so thrilled with my water garden that at the end of the summer, I couldn’t bear to return my beautiful pets; this led to an offer from my husband to build me a pond.

We researched the cost of doing it ourselves vs. having it built. We found several landscapers who advertised that they were in the pond building business and called several of them for estimates. Dennis Shennard, owner of Groundmasters, returned my call and immediately set up a date for an estimate about a week later. Prior to this meeting, we had researched an Aquascapes Design pond system and its cost for materials. Faithful to his word, Mr. Shennard arrived not only exactly on the date that we had set up, but he was also twenty minutes early! He showed us the Aquascape Pond System in several sizes, plus a clear description of how the systems work. He then wrote up an estimate and sent it to us that same week. My husband and I were truly excited and couldn’t believe that the estimate he had given us was well below what we were anticipating. We agreed to hire Groundmasters to build our new pond and the date was set.

When the date finally arrived, Dennis and his crew arrived early; in less than one hour, the first shelf of our new pond had been dug out. By afternoon, they were building my beautiful waterfall. I have never seen a more dedicated group of workers. The pond was completed, filled, and the waterfall was running by 4:00 in the afternoon. In addition, all of the rocks and stone were placed neatly around the pond and our landscaping scheme was in place - including several beautiful bushes, trees, and perennials.

It is now one year later and Dennis still stops by regularly to check my pond system, update me on new things he has learned from attending seminars, and to bring me some of the most beautiful Koi fish and new plants for my pond.

My husband and I have enjoyed our pond so much this year, from the frogs resting on their lily pads and the waterfall splashing sending crystal bubbles across the water’s surface. We often make our way down to water’s edge to feed and admire our Koi, the jewels of our pond. Each one has a name and they love to be fed several times a day, and now they will even come to the pond edge to eat watermelon right from our hands. We have now hired Groundmasters once again to create an upper pond and stream, as well as a cobblestone walkway and patio which will lead you from one pond to the next.

As my husband and I soon discovered, this is a hobby that can be addictive. But rest assured, when you hire Groundmasters and Dennis Shennard, his creations will far exceed your greatest expectations. It is evident when you speak to Mr. Shennard that he truly loves what he does. Each new pond he builds is a piece of art and a reflection of his creativity.

In the Spring of 2004, two teachers approached me with the idea of putting a Koi Pond on our school site. They were brimming over with ideas about how the pond could connect with all of the subjects we teach at school. Their enthusiasm was contagious, and with the generous support of our PTO and the cooperation of our custodial and maintenance departments, and under the superb guidance of Dennis from Groundmasters, a courtyard at Crossroads North Middle School in South Brunswick became the home to an extraordinarily beautiful pond complete with bogs and waterfall. Dennis spent time at school working with school staff to conceptualize the best use of our space. He transformed this area into a wonderful ecosystem that is now home to several frogs, turtles, goldfish, Koi, and most recently, dragonflies. Water lilies and other plants surround the pond and grow from within. The staff and students could not be more delighted with the joy and new learning the pond has brought to our school. Dennis did an incomparable job at a very affordable price and provided us with guidance, support, and even a brass plaque to commemorate the historic moment when the pond was officially opened.

Groundmasters completed an 11 x 16 pond for Crossroads North Middle School in April 2004. The students truly love not only watching it, but taking care of it, visiting the inhabitants (fish, frogs, and turtles), and viewing the waterfall. Students have been inspired both artistically and academically. Both students and teachers alike can be found down there on any given day, and you will find students studying the fish, drawing the water lilies and dragonflies, reading a book, or just relaxing with a friend. It is the most soothing spot in the entire school, and it is a living, breathing place of learning. Our students love watching wildlife and nature up close and this is a living, breathing, ecosystem. The pond at Crossroads North has become a living classroom, an environment in which students and teachers are invited to learn.

My wife did not want a pond... She said, "No Way!" When we commissioned you to do the patio, we never expected the absolutely awesome workmanship of the finished product and at such a competitive price point.

Your team was terrific!!! The pond was my idea and now a 25th anniversary present. After seeing your work on the patio and then the artistry on the pond to complement the exquisite patio, my wife went nuts!!! It is outrageously beautiful and she now says it was her idea.

We sit on our new patio and totally enjoy our new pond and landscape. You did a fantastic artistic design that will be a part of our lives forever. Amazing...thank you so much.